If you have already bought the new Frozen Bluray+DVD+HD Digital, you may have also seen that one of the characters is noticeably absent.

The movie posters went from this 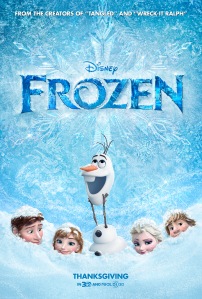 to the DVD promos of this

and then, suddenly Hans disappears for this

Insert reindeer.  Delete person.  In other words, Disney has taught us that we can’t trust anyone.  Ever.  Not even Disney.

It’s not like Hans doesn’t play a major role in the film; I need to do the math, but I’m pretty sure he gets as much screen time as the others on this cover.  I know he gets way more lines than Sven.

He’s even part of the 6-piece Frozen Play Set.

I can only conclude that Mr. of the Southern Isles got kicked off the team just because he’s a villain.  The problem is, if you are only three years old, you don’t know that Hans is a villain, unlike all the four-year-old kids.  By taking Hans off the cover, Disney completely ruined the big surprise.  (Which was not that big of a surprise, but you know, some people really like waistcoats.)

This is a sad day for villains, who work so hard to bring us exciting and meaningful stories, and get so little credit for their effort.  It’s even worse than that Amy chick who got booted when Google bought her company, because at least she has something to put on her resume.  This is even freakier if you agree with Reddit folks who claim that Hans was actually brainwashed by the trolls into backstabbing Anna for the sake of their Kristoff.  (I know that’s a bit of stretch to believe, but Glenn Beck has claimed weirder things.)

What this also means is that movies need to start coming with admonitions in the ending credits, in addition to the cell phone and chatterbox warnings before the movie starts.  Instead of Marshmallow reappearing to pick up the crown and dance, he should have told audiences,

“Hey, don’t tweet, facebook rant, or blog about the surprise twist, because that’s mean, you know.  And you reviewers can talk about feminism and slit skirts and damsels-in-distress, but don’t give away Anna’s act of true love, because then it won’t be so touching.

In fact, all y’alls should just come back with your friends and readers to watch it together again.  But when you do, don’t grin knowingly every time Anna and Hans smile at each other, because everyone deserves to have their hearts crushed just like yours was.”

The next time Disney throws a sucker-punch in the final inning, we’ll be ready, and perhaps viewers will be more discreet.